Ian Mack was born in England and spent his early years studying and painting in London. He then lived in Mexico where he discovered the vibrancy and emotional power of color.

Ian moved permanently to the United States in 1981, spending twelve years in Colorado before moving to the east coast. He has lived and worked in New York since 1994.

His early work was figurative representational realism emphasizing the flattening of space and the removal of traditional perspective. Driven by color, his current work is abstract—referencing very small details of his surroundings that become small and large scale paintings.

Mack’s Chelsea studio overlooks the area that has become Hudson Yards. Since 2015 he has been making pieces about new buildings seen from his studio window. These pieces focus on the construction phase of the Hudson Yards project rather than the finished buildings, zooming in on small elements of the structures that will eventually be covered and never seen again.

Listen to “Ian Mack at the Lemonade Art Fair” on Spreaker. 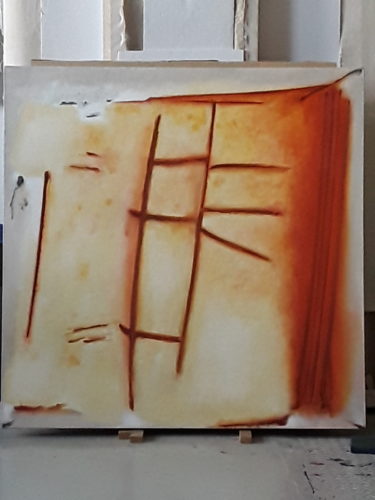